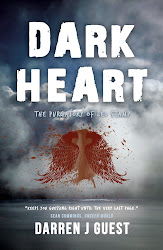 I think it was February of this year when Anna Torborg, cover artist and editor extraordinaire at the small but mighty indie publisher Snowbooks, emailed me to see if I’d be interested in doing a cover blurb for a book she thought I’d really like. I didn’t hesitate in my answer since she’d already asked authors for blurbs for my books, so I thought to return the favor.

What I didn’t expect was how rewarding a reading experience it was going to be. Dark Heart: The Purgatory of Leo Stamp is the first book for British author Darren J. Guest and to sum it up in a short sentence: it’s a helluva read! I thoroughly enjoyed this book not because I’m a fan of horror or that I’m constantly looking for books that deal with our darker nature, and there’s a lot of that in this book. Leo is a guy with a fair amount of wealth as the book starts out. He lives a relatively solitary life with few friends and there’s this business of a James Bond poster on the wall that … well… it talks to him. It analyzes him. It calls into question Leo’s motivations and points out his flaws, and it does this using Sean Connery’s voice. He’s Jiminy Cricket on acid, seriously.

At first glance, you might think that Leo is mad – he does, after all have conversations with an old movie poster, but it doesn’t take you long to realize that these conversations exist because Leo’s heart is empty. He admittedly floats through life. He covets his best friend’s girlfriend Sadie because of an almost moment years ago. He is a shadow of the person he could be and very early on in the book, he dies. That’s when everything changes for Leo because he’s going be engaged shortly in some heavy duty body swapping – and the real head spinner is the *other* body swapping that is about to happen. That’s where things really start to take off because the person occupying Leo’s body might just be a killer who is as old as time itself.

I truly can’t reveal much more of the plot than what I’ve written because this book becomes a real page-turner and there are plot twists that will make your head spin. There’s a shadowy character who forms an alliance of sorts with Leo. There’s a race against time to stop further murders and there’s this business of stopping the being that is currently residing in the mortal husk of dearly departed Leo.

This is a classic horror/suspense novel. It shines a light into the dark places that make up the human psyche. It challenges you to root for a hero who by all accounts isn’t exactly someone with terribly redeeming qualities and it pushes you into wondering whether what Leo is experiencing might well be an out-of-control schizophrenic hallucination. This is the stuff of a great book, where the reader must suspend belief to reconcile fact from fantasy. Is Leo’s purgatory in another body real or isn’t it? Is this murderous person someone that deeply flawed Leo can stop?

I finished this book in a day, and that’s rare for me because I’m a notoriously slow reader. It’s a fresh take on horror because it doesn’t lend itself to formulaic writing and predictable plot twists.

Give it a spin and buckle up. There’s hair-pin turns in this one and you’ll need your wits about you because the ending will make you wonder why the hell you didn’t see it coming in the first place.