Not another countdown … I must be insane!!!

Okay, this posting comes with the following caveat: some of the shows on my list have been on for a couple of years but I discovered them in 2011 and that’s why they made my list. Anyway … here goes.

There is absolutely nothing to dislike about this show – not a damned thing. My better half and I found it online early in the year and watched the first two seasons over the span of a week. Holy … suffering … crap. It’s gritty, it has some funny scenes, it has really memorable characters and powerful performances from everyone in the cast. It’s one of the most intense shows I’ve ever seen in my life – riveting entertainment, and really, what’s not to like.

With solid character actors like Ron Perlman and Kim Coates (who plays Tig and who is from Saskatoon … yeah, that’s right … Saskatoon!!) on the show, you can’t go wrong. If you haven’t seen Sons of Anarchy, you’re missing one of the most inventive, well written programs on the tube and yeah, I know they’re bikers and outlaw bike gangs are supposed to be bad, but there’s nothing bad with this show at all. In a nutshell, it’s Hamlet … with bikers. Nuff said.

You can’t not like FX’s Justified. It just can’t be done. It’s the story of Deputy US Marshall Raylan Givens played by actor Timothy Olyphant and it’s based on two of Elmore Leonard’s books Pronto and Riding the Gap.  Right off the bat, it has to be good because everything Elmore Leonard has ever written is freaking brilliant. It’s got hillbillies, moonshine, off-the-wall colourful characters, gunplay, bad guys and of course a hero who is better suited to be a US Marshall in the old west than he is in modern Harlan County because he’s rather keen to shoot you … but only after he’s given you ample warning. Interesting how people manage to get shot even after Givens warns them … after he shoots you, you generally wind up with an “I told you so” from the good Marshall … oh and he has a history, you see. Because he’s from Harlan County so everyone selling drugs or running a still … they were all his friends growing up. Did I mention that his father is a criminal and Givens is still in love with his ex-wife? There’s so much to cheer about on this show, I just don’t know where to begin, but I will offer this much: two words…. Boyd Crowder  played by actor Walton Goggins. Hand’s down, my favorite character on the program … I watch it just to see what the hell kind of trouble he’s gotten himself into this time. If you haven’t been watching Justified, it’s on Netflix. Watch it … you won’t be disappointed. 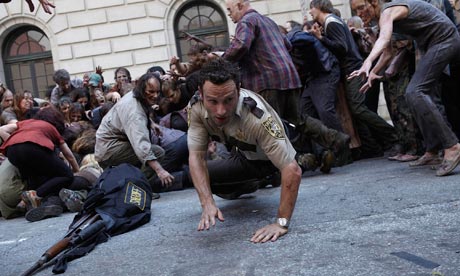 This one is a no-brainer because I’ve been blogging about the new season since October. The Walking Dead makes my list of top shows for 2011 not because of what it is – a show about the zombie apocalypse, but more because of what it isn’t – shlock horror. This is a complex show about human relationships at the end of all things, the zombies just happen to be the horrifying backdrop to a world that has gone to hell. It’s the way human beings fight to survive against seemingly unthinkable odds and what’s more, this show could have been turned into splatter TV, but it hasn’t, not one little bit. Yes, there are obligatory “shoot the monsters in the head” scenes in every episode, but the real joy of this program is seeing people slowly come undone (Shane) keep secrets (Lori) discover their courage (Glenn) turn into heroes (Daryl). If you’re not a zombie fan or you aren’t into apocalyptic fiction, you probably won’t like it unless your curious. We’re halfway through season two and there’s still so much that can go wrong for Sheriff Rick’s band of survivors and so little that can go right. Brilliant program, even if the mid-season finale’s big reveal could be seen coming from twenty miles away.

I hate sitcoms. They’re predictable, boring, poorly written and formulaic. They insult your intelligence and next to reality TV, they’re the second most likely thing to rot your brain. Imagine my surprise to have discovered The IT Crowd on Netflix this fall. I’ve blogged about it over at Dark Central Station, so I won’t go into too much detail save for the fact that few comedy programs have ever  brought tears to my eyes from laughing so hard like this show. It’s already been on for four series and sadly, there won’t be a fifth. Watch it … that’s all I can say … just watch and prepare to laugh your ass off. Okay, I’m an unabashed Doctor Who fan so maybe I’m just a tad biased when it comes to this show. I’ve been watching it since the late 1970’s and I was a relative latecomer to the 2005 reboot of the program. Doctor Who is the kind of show you’re either going to fall in love with because you *get* it or you’ll quickly lose interest in because the concept of time and space are just too damned complicated for you to get your head around. There have been eleven doctors so far, and the current one played by Matt Smith is among my favorites. This series has been fraught with mind boggling plot twists, no shortage of pathos and we begin to see Matt Smith really start to own this role and make it his own. River Song played by Alex Kingston is a fantastic character – her relationship with the Doctor finally got sorted out this season with the Doctor marrying her in the season finale … but wait … there’s more! Karen Gillan continued to entertain as the Doctor’s companion, Amy Pond and good old lovable Rory, he’s just the best … especially when he punched Hitler in the face.

Look … it’s been on TV for fifty years, I can’t go into why it’s such a brilliant show other than to say that the program continues to entertain year after year after year. It’s a national institution in the UK, the acting is among the finest I’ve ever seen and frankly the show is, in a word, epic.